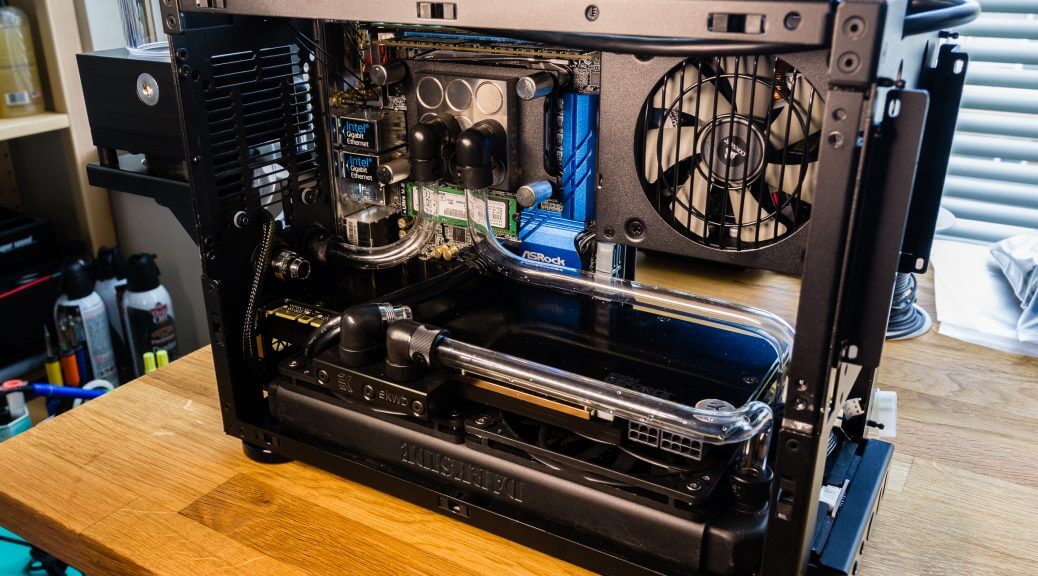 Here’s a build I made recently as I was lacking a desktop system to use outside of work. It’s every computer engineer’s dream to build a no-compromise workstation, so here’s my super-compact variation with a Haswell-E Xeon processor, 980Ti, 32GB ECC RAM, and water-cooled with two dual radiators along with the highest performing waterblocks available. The complete Mini-ITX system measures in at 17″ x 6.5″ x 10″.

There were two main points that I wanted to improve on for the second revision of the case, the first being the tubing setup and the second being the PSU cables. For the water loop, the majority of the cooling loop was replaced with hard acrylic tubing to avoid efficiency losses stemming from kinking of the soft tubing. All bends were made by hand with a small heat gun. In hindsight however, a bending jig would have saved a significant amount of time.

I also replaced the Silverstone SX600-G with a Corsair SF600. Both are 600W 80+ Gold PSUs, but the quality of the Corsair is higher with its larger fan and better voltage regulation. I also took advantage of this replacement by making custom end-to-end cables with high quality silicone rubber wiring and gold plated connectors. To organized the new cables, I CNC’d some custom acrylic cable combs to hold the wiring in place. I did also pick up some MDPC-X sleeving as well, but ended up opting not to sleeve the cables in order to retain their inherent flexibility.

Both sets of fans were replaced as well, with the Noctua fans being replaced by EK-Vadar fans due to their lower noise profile and lower minimum RPMs. The Silverstone fans were replaced as well to reduce the fan height from 15mm to 12mm, thereby increasing the clearance between the GPU for better airflow. Airflow direction was changed as well, with the bottom fans now sucking air into the case and the side fans expelling air out. This was done to allow for better passive cooling of motherboard components as well as providing the PSU with cooler air.

As a side note to those who use EK’s pump/reservoir combos: the ‘Anti-vortex PU foam’ that EK includes CAN and WILL DISINTEGRATE. This is a known issue to EK, and yet they continue to sell the product as-is knowing that it could potentially damage other components in the loop. If you complain about this to EK, they’ll tell you that any additives to the coolant voids any responsibility on their part. Luckily for me, I used nothing but distilled water so they reimbursed me for the replacement TIM at the very least.