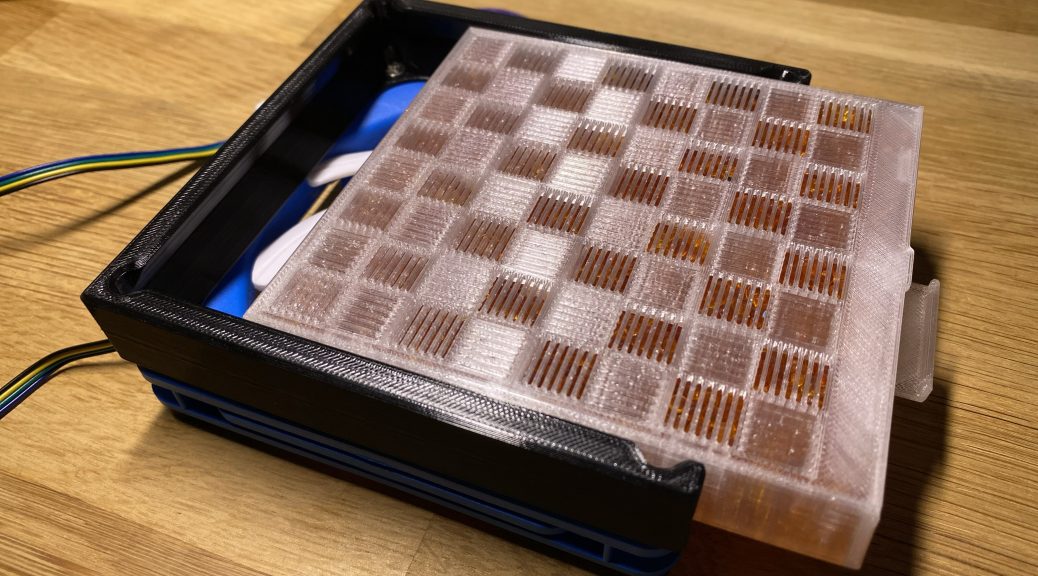 There has been some recent developments in exploring the impact of moisture on 3D prints, and from my experience so far I’ve found that having dry filament makes a significant difference in both print quality and consistency. For the types of filament that I typically print with, drying the filament drastically reduces the amount of ooze and stringing, resulting in a noticeable improvement in print quality. Filament that is too dry however has terrible bridging characteristics as the plastic tends to become too sticky.

Drying filament can be done by heating it to a point where moisture will evaporate while keeping the filament below the glass transition temperature so that it doesn’t deform. Common methods to do this involves using an oven, modifying a cheap (<$50) food dehydrator, or use commercial solutions such as PrintDry’s filament dryer. I opted to build my own from space parts I had lying around:

The temperature controller came with a SSR and K-type thermocoupler, but I trialed the SSR and found that it reached 40°C above ambient when powering the heater. With the temperature in the bucket reaching up to 70°C, I wasn’t comfortable with putting a cheap SSR in there as they have a tendency to short when they overheat. Instead, I opted to use a non-solid-state relay that was rated to operate at 70°C.

The K-type thermocoupler that came with the temperature controller didn’t work very well as it had too slow of a response time and could only maintain ±5°C in the bucket even with PID control enabled. After replacing it with a PT100 RTD, the temperature variance in the (fully sealed) bucket was reduced to ±1°C.

The main drawback that I found with this bucket design is that the temperature inside the bucket is tightly correlated with the amount of airflow across the probe. When the probe was placed at the bottom of the bucket with two rolls of filament stacked horizontally on top of it, the top roll of filament reached 20°C above the intended temperature as it was directly under the heater.

I then tried placing the temperature probe midway up the side of the bucket and arranged two rolls of filament vertically to flank the probe on both sides. This worked fairly well to circulate the hot air fairly evenly throughout the bucket, but didn’t offer much safety in the event of a fan failure. Finally, I ended up placing the temperature probe at the fan’s air intake underneath the heater. This ensured that the circulated air reached the desired temperature and will also prevents the heater turning on if the fan catastrophically fails.

Given that drying a roll of filament can take 24H or longer, it’s also important to also store the filament in a moisture proof container with low humidity (but not too low!). I opted to go with a few Sterilite 80qt Gasket Boxes here that have the capacity to hold up to 8 rolls of filament each. Humidity inside each dry box was monitored with an AcuRite digital hygrometer.

There are two main ways to regulate the humidity level in the dry box: heating the air inside the box or using desiccant to extract moisture out of the air. Heating the dry box has the advantage of lower maintenance but comes at the cost of being more expensive to operate over time. Dumping a bunch of silica desiccant in has the advantage of being cheap, but is messy and regular maintenance is required to bake the desiccant once it has lost effectiveness from absorbing too much moisture. Buying the cobalt chloride free type is recommended as bulk desiccant can generate a significant amount of dust.

Drying silica desiccant is as simple as baking it in the oven at 100°C for a few hours. One thing to note is that hot desiccant out of the oven has much higher moisture absorption rates, becoming sticky when touched and will instantly change color when immersed in water. Due to this, care should be taken to store the desiccant in a moisture proof bag before it has a chance to cool down.

I ended up going with the second method, but quickly realized that simply dumping desiccant in the box is not only messy, but also generates a lot of dust that gets on the filament. Without any air circulation, it can also take hours for humidity inside the dry box to drop to the desired level. To address this, I designed a desiccant container that mounts directly onto a standard 120mm 12V fan. To power the fan without drilling holes in the dry box, I used inductive charging coils held together using neodymium magnets. For reduced noise, the coils were modified to output 7V by changing a resistor in the voltage divider that feeds the input of the regulating IC.

After a few spills, I came up with a better idea to isolate  the desiccant from the rest of the assembly. This could be done by mounting the fan and attaching a drawer to it that could then hold a self-contained container of desiccant. Going one step further, the desiccant container could be also be printed out of a material capable of operating in the same temperature range required for drying desiccant (200-240°F), which would allow me to pop the entire container in the oven without having to open it. This led to a design centered around a standalone desiccant container printed out of clear Colorfabb HT filament with a rated operating temperature of 100°C. Printing this out of polycarbonate was also an option as it has a higher temperature rating of 120°C, but is harder to print and also generates undesirable odors both when heated. The resulting setup is a dry box capable of dropping RH from 40% to 4% in under an hour, with the RH gradually increasing over a month or two depending on how often the dry box is opened. For maintenance, I simply swap out the container with one that was previously dried and pop the old desiccant container into an oven for a few hours.

The last component keeping filament dry is to reduce exposure of the active in-use filament as much as possible. The Prusa MK3S has a direct drive extruder, so I designed a reverse bowden system to pull filament from a small dry box that was laser cut and assembled from acrylic panels. The volume of this box is small enough that no additional air circulation is required to keep the humidity low; just adding some desiccant is enough to maintain 10%RH.