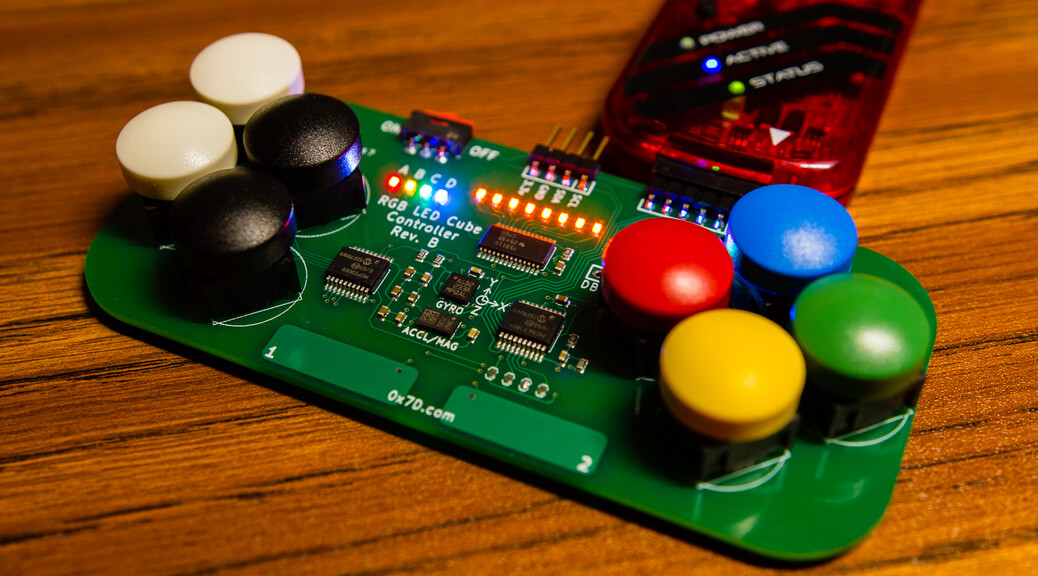 The first prototype of the controllers that I came up with were pretty simple: six input buttons (one for each direction) and 4 indicator LEDs. The controllers are polled and controlled through a basic I2C protocol, with each controller having a hard coded address. The connecting cables were custom made using this amazing 4-wire silicon cable and standard female headers. I also had to build an I2C breakout for the Cerebot board in order to be able to attach more than two controllers. Nothing beats using perma-protoboards for finalizing a breadboard design.

As for the games, I spent a few hours implementing both a game of Snake and Tron on the cube. By using the software reset capability of the PIC32 microcontroller, I’ve set it so that the cube automatically resets to an idle state every 15 minutes or so where it loops through a preset list of animations. If a button is pressed on either of the controllers, the cube goes into Snake mode. If both buttons are pressed, the cube goes into Tron mode. Both games are surprisingly hard to play in 3D.

Over this winter break, I’m planning on designing and putting together an actual PCB with ideally eight buttons, some feedback LEDs, and maybe an OLED display or two.

For the first PCB revision of the controller, I decided to expand the number of features. I increased the number of LEDs from 4 to 16, and the number of buttons from 6 to 10 (of which two are capacitive). To handle the increase in I/O, I decided to use the TLC59116 chip for driving the LEDs and the MCP23009 chip for reading in the button values. The TLC59116 chip is a 16 output I2C LED driver with 8 bits of resolution. Similarly, the MCP23009 chip provides the capability to interface with 8 I/Os over I2C. In addition to these two chips, I also added the LSM303DLHC (accelerometer/magnetometer) and L3GD20 (gyroscope) chips to the board.

For the microcontroller, I went with the PIC16F1829 as it has two separate I2C interfaces. One of the I2C interface (I2C1) will implement the slave side of I2C for communication to the Cerebot board. The other I2C interface (I2C2) will implement the master side of I2C to communicate to the other chips on the board. Four of the pins are used as I2C address jumpers, allowing up to 16 controllers to exist on the same I2C bus. The rest of the pins are used as interrupt pins from the various chips on the board. I’ve also added a few minor features: two capacitive buttons, I2C pullup resistors, a main power switch, and a UART debug port for the microcontroller. Overall, this board should have more than enough functionality for the variety of games that I would like to implement.

As soon as I received the actual PCBs, I realized that there was a major problem: the button footprints were wrong. It turns out I misread the dimensions from the button datasheets, resulting in me drawing a rectangular footprint for the buttons when the footprints should actually be squares. While the footprints were wrong, I was still able to attach the buttons however with a bit of filing and reorientation. Another minor problem I found was that the button layout worked better if I flipped the board around. Both issues will be corrected in revision B, which I’ll be sending out as soon as I test the remaining functionality of the board.

Before making some of the changes mentioned above to the controller PCB, I first tested the functionality of the first revision board by writing some preliminary code to ensure that everything worked as expected. As it did, I then went ahead with the PCB redesign. The following changes were made for revision B: I first fixed the button footprints and spaced out the buttons properly to ensure that none of the buttons overlapped. Because of the increase in button footprint spacing and size, quite a bit of extra board real-estate had to be allocated to the buttons. As such, I had to change the footprint of the PIC18 chip as well as the MCP23009 chip to SSOP-20 from SOIC-18. I also flipped the silkscreen 180 degrees as it felt more natural to have the D-pad on the right side. I’ll be sending the design to the fab house ASAP, so I should have the new boards in in just over a week.

The parts for revision B of the controller arrived a few weeks later than expected so I finally got around to finishing this project. As the pictures show, the new layout was pretty much perfect. Even the green LEDs which were a bit yellowish on the revision A board now actually has a nice shade of green. For reference, I changed out the LEDs to use these R/O/Y/G/B ones made by Kingbright. I’ve tested the basic I/O functionality so far and it’s working as expected. Over the next two days or so I’ll be working on finalizing the code and updating the code on the LED cube to interface to these controllers.